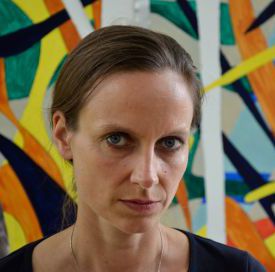 Claudia Chaseling
Spatial Painting
Berlin / Canberra, Germany / Australia
Claudia Chaseling is an international artist, born in Munich, Germany, currently living and working in Berlin and Canberra. She received two Masters degrees in Visual Art, from the University of the Arts in Berlin (UdK) and the Australian National University in Canberra (ANU). The artist has exhibited her works in over fifty solo and group exhibitions, notably in the United States, Australia and Europe. Among others her work has been featured in the X-Border Biennial, Finland and the Luela Art Biennial, Sweden. Recent projects include solo exhibitions at Magic Beans Gallery, Berlin, Wollongong Art Gallery, Australia, Staatliche Kunsthalle Baden-Baden, Krohne Art Collection, Duisburg and upcoming ones are at Yuill Crowely Gallery Sydney, Australia, Kunstverein Duisburg and at Art in Buildings, New York City, USA. Important latest group exhibition encompass Richard Taittinger Gallery, New York City, Momentum, Berlin and Mural Projects at Volta10 in Basel. Major grants and scholarships received continuously – include those of the German DAAD, the Australian Samstag Scholarship, the Karl Hofer Award, the Australia Council for the Arts Grant, the artsACT Project Grant, the IGNITE Career Fund and the Postgraduate Award from the Australian National University. Claudia Chaseling has taken part in various international visiting artists programs and artists residencies, for example at Art Omi, New York, at the International Studio and Curatorial Program in New York City, at the Texas A&M University, at Yaddo in New York and at the Australian National University (ANU). The Verlag für zeitgenoessische Kunst und Theorie Berlin published her first extensive monograph in 2016 (http://vfzkt.com/aktuell.html).
Claudia Chaseling’s work comprises wall-size paintings and space filling murals. The artist creates upside down landscapes with reversed and distorted perspectives. The imagery of her Spatial Paintings consists of estranged landscapes, mutated creatures and plants whose deformation is caused by gamma radiation. Claudia’s expansive wall/floor paintings interrupt the geometric order and balance of the exhibition space through their profound depth and sway between the two and three-dimensional. Using a specifically developed technique with dry colour pigments, the artist addresses the antagonistic relationship between structure and chaos, creating new compositions from a state of disorder. The result is an amorphous system of complex fragments reminiscent of light reflections, biomorphic shapes and objects in form of capsule-like creatures. Claudia creates an atmosphere of alienation searching for a new perspective in painting, which captures the multidimensional, instable realities we exist in today: the mutated perspective. The artist’s current work was initiated in 2005, after seeing a documentary by Frieder Wagner addressing the use of depleted uranium weapons and the research of Prof. Siegwart-Horst Guenther (https://www.youtube.com/watch?v=_9-sI7fA8AQ). The diverse body of works, from Spatial Painting to the Graphic Novels, deal with facts and the consequences that in every conflict zone on earth where the NATO or the US are involved, weapons are used that contain and distribute long-term radioactivity in form of uranium and plutonium dust.
Actividade