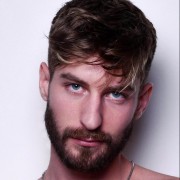 Pierre Barbrel
Visual Artist
Paris/Lisbon, France/Portugal
Pierre Barbrel was born in Paris in 1991. He studied literature and art, and completed a fashion design school curriculum to fulfill his creative endeavours. After his studies and his enriching professional experiences in French luxury fashion houses, he returned to his first love: a thoughtful art, opposed to the strict aesthetic of fashion. Fascinated by religious art and its mythical representations of transcendence, Pierre Barbrel commits to recreating, through his art, the experience of his confrontation with epiphany. His work is rooted in visual inspirations derived from syncretic myths and occult symbolism. His leitmotiv is the materialization of the soul through the body, a form of incarnation. Pierre’s work was exhibited four years in a row at Le Grand Palais for ART CAPITAL, in Le Salon des Artistes Français, which earned him a bronze medal in 2014 and a Silver one in 2018. He also won the 1st Prize in the Category: Fine Art – Nudes of the International Photographer of the Year 2017 Photography Awards.
https://www.pierrebarbrel.com/
Actividade