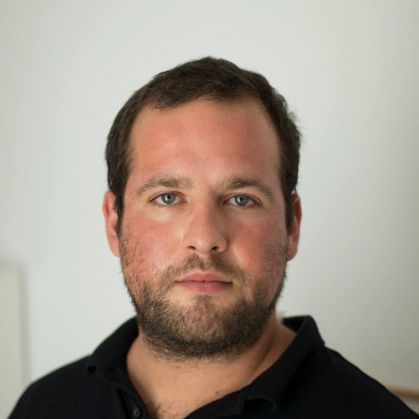 Diogo Bolota
artist
Your City, Portugal
Diogo Bolota(Lisbon, 1988) lives and works in Lisbon. He studied Painting(2006-2008) at Lisbon School of Fine Arts, holds a BA in Architecture(2008-2012) from the Lisbon Technical University and a MA Drawing(2012-2013) from the University of the Arts, London. He has been exhibiting his work since 2014. He participated in group exhibitions such as Canto Chanfrado(2014) at Avenida 211; Babel(2015) at Miguel Justino Contemporary Art; Cidade Jardim(2017) with Fernando Brito at Galeria Diferença; Que farei eu com esta espada?(2017) at Zaratan; Nome do meio(2018) at Moradia. In solo he participated with Sabotagem(2015) in Expedição’s Program at Maus Hábitos in Oporto; in a project room named S/ Ponto de Fuga(2015) at Cunha’s Gallery in Lisboa, as well as Objectar(2016) at Geological Museum(Lisbon); Esgaravatar(2016) at Medeiros e Almeida’s Museum(Lisbon) and Synalepha(2016) at Museum of Modern Art(Sintra). Diogo Bolota has also participated in Tapada da Tojeira and República das Artes de Cerveira’s residencies program(2016). He has his work published in Caixa Negra’s catalogue from Maus Hábitos and Guião from the Medeiros e Almeida’s Museum. He was shortlisted to Novo Banco Revelação 2017 Award at Serralves Foundation(Oporto).
In the beginning, there comes an action. Then the actions turn into things that then turn into a trap. The trap challenges us to set ourselves free. How do we go about that? By star ting all over. We have to begin once again the very strategy that is doomed to fail, endlessly.
Actividade
Aqui será exibida a lista de itens!
https://www.umbigolab.com/wp-content/plugins/wp-symposium-pro/activity/../css/images/wait.gif